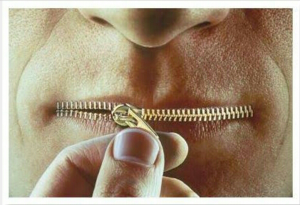 I have so much to muse about. About so many things. But I can’t muse about them out loud. The reasons preventing me to say whatever I want to say is always one or more of the following:
It’s not diplomatic.
It’s not politically correct.
Or it’s insensitive towards religion/s.
It’s not in line with popular opinion.
Or in line with liberal belief.
Or with conservative belief.
It’s hate speech.
It’s offensive.
It’s racist.
Or sexist.
Or not gender sensitive enough.
And always too Biblically literal.
And too old fashioned. (Ah, and there were simpler times, weren’t there?!)

Anyway, my father taught me that actions always have consequences and that you don’t utter words if you are not prepared to have them testify against you in the black and white of ink on paper. A wise man he was indeed. I lived my life by those words. And it didn’t only teach me a lot – it saved my butt many times. I even treated love letters I wrote during my younger years according to that principle. (Of course when I write to the beloved I throw all caution to the wind – just because I can.)

But I’ve learned over the years that living by a rule like that not only saves one embarrassment, it also builds you up. It makes you think before you speak your mind. Because even if I have an opinion about everything under the sun, it doesn’t mean that the world needs to hear it. That also doesn’t mean that I may never air an opinion, because that would just make me spineless. But there is a time and a place for everything under the sun, and sometimes it is time to keep quiet.
Fortunately, there is One Who is always listening and to Whom I can talk about the undiplomatic, politically incorrect, unreligious, unpopular, unliberal, unconservative, offensive, racist, sexist, gender insensitive, too Bibilcal and old fashioned stuff all I want. It’s called prayer. And it is private. And it can be done any time, anywhere. Nobody has to shout at me to do it. I’m not restricted to a time or a place. I can do it anywhere, all day long, without anyone realising. There is also no paper trail so that this post-modern society can accuse me. I’m only left with the relief and the knowing that He has it all in Hand.

The defiled one destroys his neighbour with his mouth,
but the righteous is delivered by knowledge.
(Proverbs 9 verse 11 – From the Bible)