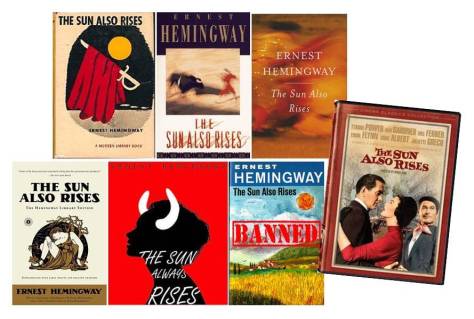 Just a few of the many reprint covers. On the right is the movie poster (1957)

What it is about

Or in short – it is about a group of lazy people doing nothing much (my words).

What I thought about it

I am a fan of Ernest Hemingway’s writing. I need to say that before you read my review of The Sun Also Rises. There, the disclaimer is out of the way. J

I wonder (I should say doubt) if this book would have been published today – in spite of the fact that it was seen as some sort of phenomenon it its day. It was even banned for a while!

I love reading old books, learning about how life had been lived a century ago and studying the difference between the writing styles of authors old authors new.

Although I find the writing styles of authors from previous eras excruciatingly slow-paced and more than quite a bit boring, I also find it relaxing and more personal to read, as authors from the past sometimes addressed the reader directly (“So, you see, dear reader…”). I must admit that this way of writing is very outdated and will not appeal to most readers today.

Nowadays books are written more cold-blooded and recipe-like to publishers’ prescribed likings. Not that that is all bad. I’m sure we are spared a lot of rubbish by this funnel built into the industry. Today, if a book is not attention-grabbing and fast-paced enough from page one, there is no hope for being published. And this is where I will get to the point with regard to The Sun Also Rises.

Nothing actually happens in this book other than everyday events. It reads more like a travelogue from someone’s journal than like a work of fiction. I didn’t fall in love with a single character in the story. As a matter of fact, I didn’t even liked anyone of them. They were all a bunch of good-for-nothing drunks (I don’t judging – I’m just stating the obvious) who spend their lives eating and drinking, fluttering from one café or bar to another to another to another…

The main character is a lifeless, soulless, spineless man who dances to the music of his so-called friends’ lives. During the whole 200+ pages of the book absolutely no character development occurs. They all stay the life wasting, parasite-like beings they were in the first few chapters. There is no sign of soul searching, introspection, no real crisis that lead to change in behaviour or climatic chaos that has to be resolved as all good writing tips teach aspiring authors that there must be.

What are to find, are continuous accounts of every little unimportant happenings (because they can’t be called ‘events’) – description upon description of everyday activities, like knocking on a door and receiving no answer, sleeping or lack thereof and more eating and drinking and of course a lot of bull fight watching. And dialogue about the mundane.

I realise that my review of this book sounds very negative up to this stage and it is, but there are also positives. What I like about reading these old books in general is that they don’t convey a modern writer’s imagination and research of what life way back when was like, but that the portrayal of the period is real. The way people dressed and talked and behaved is authentic – it is not subject to how the author imagined it to be. Even though people were also confronted with difficult issues, world wars, epidemics and other things, life was definitely living at a slower pace and I think it may have been less complicated that it is today. There wasn’t that much to do. Work was just enough for one person for one day. There were no computers to cause overloading. Cell phones were not even dreamt of, so people still actually interacted with real people without continuous being interruption.

Authors then wrote what readers could identify with and readers read what was given to them. (Although I think that most people in the past were hard working humans and stories like this about drunken writers might have served as a form of escapism.) Like any other industry, the publishing industry evolved, but in spite of the boredom, the lengthy descriptions and the sometimes weird usage of words and language, I am fascinated by old books, just as I was absolutely fascinated by this boring book. I can’t explain it. I just was. Maybe I kept thinking that something will eventually happen. I don’t know. Or maybe it was just the never-ending teeming dialogue that is so far-fetched in today’s context, but it kept me intrigued.

I am also perplexed by the writing process of Mr. Hemingway, specifically with regards to this book, because I can’t figure out how on earth such a book could have been planned as there is no structure to the story. No real beginning. No real middle. No real end.  The Sun Also Rises is basically just a narrative of a few months out of a few people’s lives, nothing more. Yet, it fascinated me that one can write such a boring story and actually finishes it and gets it published. But, time and circumstances were different.

One thing that keeps bothering me while reading Hemingway, and I have read a few of his books now, is the fact that one always read in writing tips that he wrote such short sentences. I am not sure that everyone who quotes that tip has actually read Hemingway, because I find his work a fine balance between short, long, very long and everything in between sentences. I love his writing style.

Anyway, I don’t know if anyone still reads old authors and if anyone will profit from reading this review, but I enjoyed writing it. And that’s enough for me. I would though, encourage you, if you haven’t before, to read some old books – even if it is just to get a good giggle from the way people reacted and dialogued then or were expected to behave. Yes, the pace is painstakingly slow and the writing is very detailed, but one learns a lot about the development of writing and about how people used to live. Try a few of the classics. I propose that you read some of those shortened classic series’, because otherwise you may lose your way halfway, especially with a very long-and-not-much-happening book like Anna Carenina. Try Little Women, Sense and Sensibility, A Tale of Two Cities etc. Most classics are in the public domain, which means that you can download the ebooks for free. One of my favourite old authors to read is Agatha Christie. Her mysteries are still captivating reading, even if it was written almost a century ago. And there are lots of them to read!

My rating of this book would have been 1/5 (for actually finish writing it) if it was by any other writer, but just because it was written by Ernie, I’ll give it a 2.5/5.

The Sun Also Rises is available in some book shops as well as on the Internet as an ebook. It was also made into a movie and was released in 1957.