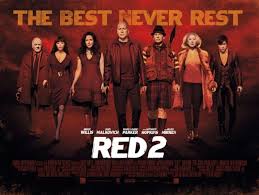 This is one of those few times that I have to let go of my view that the sequel are normally not as good as the original.

With most of the cast from RED (Retired, Extremely Dangerous) back in this movie, it was such fun to see some of my most favourite actors in action together again. I was obviously nervous about the outcome, but after asking around to hear what friends thought of Red 2, my family and I set off to the cinema with great expectation. And now it is official – RED 2 is even better than its predecessor! Those ‘retireds’ are still extremely dangerous – and funny.

I am not going to give away much of the plot, otherwise I will spoil your fun, but the usual culprits are there as always: the world is in danger; the world must be saved; the RED-team is the key to saving the world; there are friends who turn out to be foes; there are foes who turn out to be friends; there are lots of action; there is heavy automatic machine gun fire that doesn’t kill any friends; there is a lot of enemy blood; there is a point-of-no-return and then there is the end. (I hope I didn’t spoil it for you.)

This is an action rom-com and although they appear cool and tough, the actors never really take themselves too seriously. With the exception of Morgan Freeman, who’s character died in the previous movie, all the oldies are back – Bruce Willis as Francis (Frank) Moses, who started playing house with his Sarah (Mary-Louise Parker) after their last adventure, the obsessive conspiracy theorist, Marvin (John Malkovich), the cool Brit, Victoria (Ellen Mirren) – who sometimes make James Bond look like a wimp – and her Russian lover, Ivan (Brian Cox). New faces are those of Catherine Zeta-Jones (Katja), a foe played by Byung-hun Lee, and the absolutely marvellous, Anthony Hopkins (Baily), who is brilliant as always. They were all in fact excellent, but the surprise package of the movie is definitely Mary-Louise Parker, who had grown so much since her role in the first movie that she takes pretty much centre stage now and who may have snatched away the show from in front of the seasoned stars’ noses. And she is funny on top of it.

The movie is a bit too dark and violent for young viewers, so rather save it for date night or late night when the little ones are asleep. My favourite piece of ‘off’ dialogue is between Sarah and Victoria after Sarah faked an assassination on Frank, Sarah and Marvin.

Sarah: Where did you get the bodies?

Victoria: From my freezer.

Red 2 is good entertainment if you disregard the over-the-top violence and the many, many, many dead bodies.

4/5 Good, watchable, but it may have something to put someone off, or may just not be your cup of tea.

3/5 OK, but if you have something else to do, reconsider and watch it when it comes out on DVD or on TV.

2/5 Pff, why would they waste time to make it and why would you waste your time and money?

1/5 Don’t even bother. You have to be paid to watch this and then be recompensed for your time.