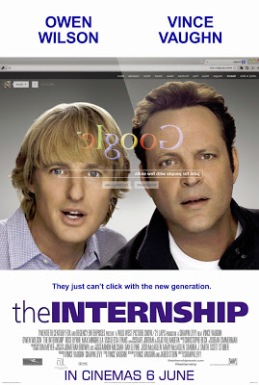 This movie may seem like one big Google ad, but there is definitely more to it than just a marketing gig. Billy and Nick are two very good, but very archaic salesmen who only found out that their company had closed when trying to sell a new range of watches to a client.

Being over forty and not having many skills and they had to find jobs quickly, something that is not so easy anymore in America’s declining economy. But, ever the opportunists, the two stay positive and land an interview for an internship at the big search engine company, Google. Some geek there decides to give them a chance with some disastrous and real funny consequences.

Billy and Nick just don’t know what giving up means and when the one gets a bit low and wants to give up the other is always there to neatly shepherd him back to their dreams. The movie may be a bit optimistic and unreal with regard to the two main characters’ abilities and their hopes to land jobs at a company of Google’s status, but they remind us to never stop believing, to keep going, to never stop dreaming and to never give up.

Although the scene in the club drags on for just a tad too long and may be a bit too explicit, it does serve a purpose within the framework of the movie and to get the Billy and Nick’s very nerdy team to start functioning as one.

What makes this movie even more watchable is that the viewer gets a look into the wonderful and until now, mysterious world Google created for themselves. What a workplace! I don’t know if Google will find this big ad a blessing or a curse, because after this movie, they may be flooded with applications from hopefuls without any talent for the IT world. Heck, even I want to work there, and I have the best job in the world!

Although this is overall a very good movie with quite a positive message, as a parent I will not recommend that under 16s watch the movie, mostly due to the scene in the club. Children probably see more at home when watching TV and DVDs, but still.

Language: There definitely must be a few swear words, but I can’t even remember them now.

Nudity: None, although the dancers in the clubs are sparsely clothed.

Sex: There is a bit of sex talk and suggestive behaviour (in the club scene).

Violence: Not much more than a punch to Billy’s face and in poor Nick’s… you know where…

Offensive Stuff: There are no real religious or other remarks (other than the above mentioned) that will offend people of any religion.

4/5 Good, watchable, but it may have something to put someone off, or may just not be your cup of tea.

3/5 OK, but if you have something else to do, reconsider and watch it when it comes out on DVD or on TV.

2/5 Pff, why would they waste time to make it and why would you waste your time and money?

1/5 Don’t even bother. You have to be paid to watch this and then be recompensed for your time.